Linkedin Data Reveals That Marketing Could Be on The Move Up North.

The composition of marketing teams across the UK’s business districts is beginning to change, and graduates from Universities in the north of the country are closing in on their southern counterparts.

A study of 1,000 Linkedin profiles, carried out by digital marketing agency NORTH, shows that while university towns in the South East are still producing the most marketing professionals, the North West and Yorkshire & The Humber are climbing up the ranking order.

Percentage Breakdown Of Marketing Professionals From Universities Within Each UK Region: 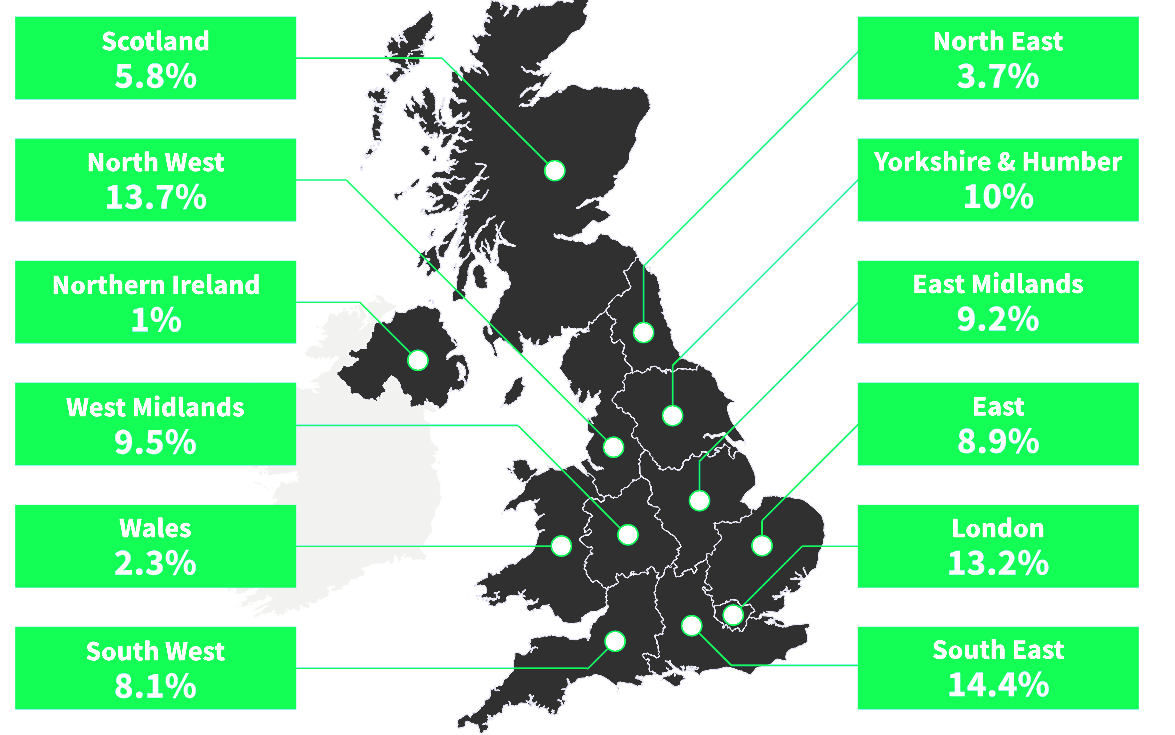 The map shows that the South East is producing the highest amount of marketing professionals from universities in the region, with 14.4% of those sampled earning their degree from institutions such as Sussex, Oxford and Portsmouth.

The North West accounted for 13.7% of graduates sampled, with universities in cities such as Manchester and Liverpool catching up with the South. Yorkshire & The Humber secured a rank in the top 5, with 10% of marketing personnel securing their degree in cities across the region. The wider picture showed Scotland had a share of 5.8% and Wales at 2.3%.

It is perhaps unsurprising that London is a clear front runner when it comes to producing the most marketing professionals. London has been inextricably linked to prestigious companies when it comes to marketing, with a flurry of bigger brands using the UK’s capital as their base to inspire strategy, with unrivalled levels of funding and a sought after business culture.

Amongst the less popular locations for marketing graduates was Swansea, Milton Keynes, Doncaster and Wolverhampton.

Top 10 Universities That Produce The Most Marketing Professionals:

A striking number of Northern institutions claim the top spots. The University of Leeds, Nottingham Trent University and The Manchester Metropolitan University are the top three from the graduates sampled, indicating that a northern takeover could be set to reshape the marketing sector in the UK.

While marketing titles are constantly evolving as the sector grows, the data provided an insight into the link between university regions and the seniority of positions held by graduates.
A significant number of those with ‘Marketing Manager’ as their role title were Nottingham Trent marketing graduates. Similarly, graduates from the University of Oxford filled positions with senior titles, while few were in entry-level Marketing Assistant roles.

Over 25% of graduates in the North West had ‘digital’ in their title, helping to build the potential of the sector outside of the capital. This is also shown across the North East, where despite the region producing one of the lowest levels of marketing professionals, over 50% of Newcastle and Northumbria University marketing students had the term ‘senior’ or ‘director’ in their title.
Similarly, though Swansea was amongst the less popular university towns, over 57% of graduates from Universities in Wales had ‘senior’ or ‘VP’ in their titles.
The map of marketing graduates and UK universities is certainly opening up to include more newly qualified professionals outside of the South.

Discover the potential that marketing could have within your business through our services, from boosting visibility with paid search, to gaining deeper insights into performance with analytics.